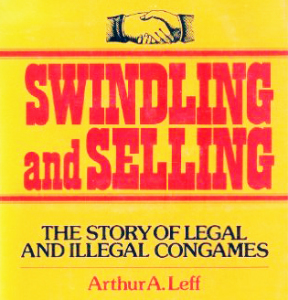 Imagine yourself tracking down a citation, constructing a syllabus, pursuing an intriguing research topic, or reading up on a favorite subject. You’ve organized your materials, refined your ideas, and are busily tracking down and collecting sources. Everything is falling into place, until you realize with a sinking feeling that a book on your list is out of print.  A few minutes of online research reveals that used copies are prohibitively expensive. The public library holds no copies, and, even for those with access to a university library system, the nearest copy is housed in an off-campus storage facility hundreds of miles away. The book you need (which has suddenly become of utmost importance to your entire project) could very well be a “caged masterpiece”—accessible in a very limited way, but out of reach to a wider audience in the valley of the unassignable.

One example among many such works is Swindling and Selling, by the late Arthur Leff. Despite its continued utility and relevance to the study of consumer protection, the book remains inaccessible to readers who lack access to a major research library, or to the funds necessary to purchase a relatively rare used copy. In the review below, Authors Alliance founding member Chris Jay Hoofnagle, director of the Berkeley Center for Law & Technology’s information privacy programs and senior fellow to the Samuelson Law, Technology & Public Policy Clinic, reviews this out-of-print book that is, for all intents and purposes, unavailable to scholars, lawyers, students, and the public: a caged masterpiece.

Arthur Leff’s Swindling and Selling is a classic, wry analysis of the blurry lines between what we consider honest salesmanship and illegal fraud. Not all selling is swindling, but all swindling is selling, Leff explains. He shows how both sellers and swindlers have to overcome similar forms of buyer resistance. Leff explains these dynamics in the language of Erving Goffman and through some use of behavioral economics.

In the case of swindling, con artists weave a dramaturgy where they hold a monopoly over some valuable asset, and the mark is set up as monopsonist, an exclusive buyer with access to a special deal. The scheme is premised on mutual need, and policing of these schemes is difficult because for part of the transaction, the mark is a willing participant. Here, Leff describes scams such as the “Spanish Prisoner,” where a mark is promised great riches if he will only bribe some minor official to free the holder of the treasure (the modern version of this includes the “419” scheme). Leff then pans out to show how the elements of swindling are present in some political and religious movements (although these may not be scams). The “ancient estate” scam, where marks are convinced that a fantastic old property was improperly distributed, making many modern-day people claimants to it, is similar to political movements to repatriate lands. “Godcons” are con games where the “conman…induces one or more marks to trade money…of this world value in exchange for the promised delivery of quantities of exceedingly valuable divinely manufactured goods.” Pyramid schemes operate by distracting marks from the opportunity costs of their labor, and by getting them emotionally attached to a swindle instead of more viable employment.

Leff’s analysis shines when he switches from an entertaining series of examples of “bunco” to legal selling. In a perfect market, bargains should not exist. Thus, sellers must create a plausible dramaturgy to explain why a buyer gets a bargain. This could be a clearance sale, with praises the buyer as parsimonious while implying that less careful consumers are getting the anti-bargain. Leff then turns to mass advertising, which relies upon several predicable cons: the “sufficiency switch” and the “Calvinist causation.” The former refers to the many products that suggest some cause and effect between the purchase of a product and some goal—clear up one’s complexion with a skin cream and get the girl. The latter is Leff’s term for positional objects: the Cadillac or the Mercedes. These things operate from an opposite logic. They do not make one successful, they license a script (and a prop) to the mark: “Buy this symbol with which you can advertise, powerfully and convincingly, that you are what you, and those about whose opinions you care, devoutly wish to be.”

This wonderful book is out of print, and practically unavailable to new generations of lawyers and thinkers who focus on consumer protection. As of this writing, the least expensive used copy of it is $74 on Amazon.com. The entire University of California library system has only two copies of this work. According to Google Scholar, despite Leff’s brilliance and masterful discussion, the book has only attracted 27 citations.

Countless works of enduring value and significance fall out of print and remain essentially off-limits, which not only denies their creators an intellectual legacy, but also stymies researchers, libraries, artists, and others whose work could be enriched by access.  A treasure trove of creative, historical, and cultural output languishes in this informational no man’s land, and the power of these works to inform, educate, and enlighten is greatly diminished.

Authors Alliance is deeply committed to the belief that these “caged masterpieces” deserve to be widely read. To that end, we are creating a series of examples to highlight them. We want to hear from you about works that are valuable, interesting, relevant—and out of reach. We invite you to contact us at info@authorsalliance.org and nominate more “caged masterpieces” to be featured in this space. And to all authors whose own books might be locked away out of sight, we encourage you to take action and you recover the rights to your work in order to give it new life.