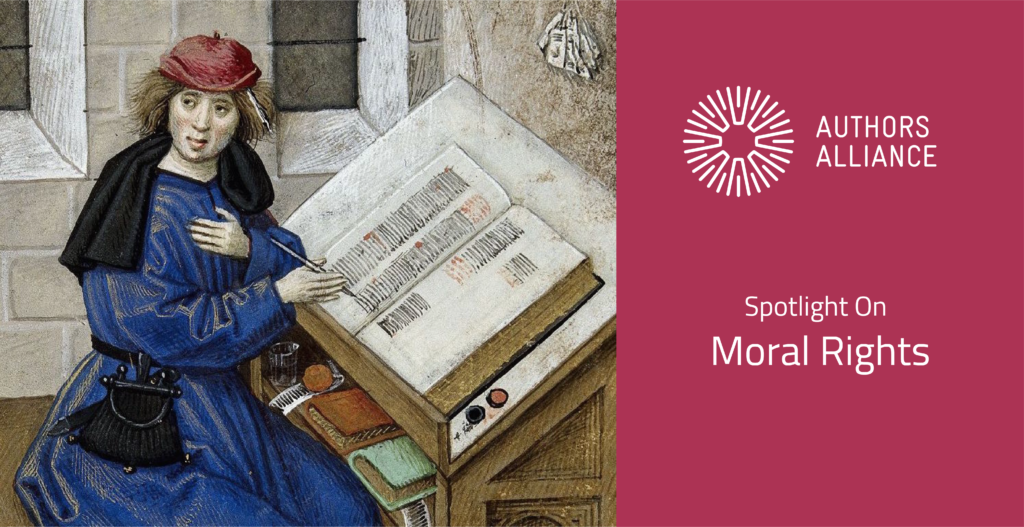 The following is a guest post by Authors Alliance President Pamela Samuelson. We welcome your comments as we continue to explore the topic of moral rights over the coming weeks.

In preparing Authors Alliance’s forthcoming comments in response to the Copyright Office’s Notice of Inquiry for its Study on the Moral Rights of Attribution and Integrity, I thought of eight reasons why it is in the interest of authors as well as the public for authorial attribution and integrity to be statutorily recognized in U.S. copyright law, as they are in the laws of virtually every other nation on earth.

First and foremost, many authors care deeply about having their names associated with the works they create and about their works being available to the public in the form in which their creators authorized dissemination. These authors experience lack of attribution and mutilation of their works as significantly injurious to their well-being.

Second, statutory recognition of attribution and integrity interests would send an important signal to the public about the respect that members of Congress have for the myriad contributions that authors make to the ongoing “progress of Science,” consonant with the constitutional clause under which Congress enacts copyright laws.

Third, recognition of authorship attribution and work integrity is in the public interest insofar as members of the public care about the authenticity of creative works with which they interact. Readers, viewers, and listeners want reassurance that the works to which they have access were created by specific individuals and have been vetted by the authors as the works authorized for public dissemination. For example, someone who has read several William Gibson novels and just purchased another will want to see Gibson’s name on the cover and be assured that the book just purchased is in the form the author wanted to reach his readers.

Fourth, being attributed as a work’s author and being able to control the integrity of one’s work is important to building and maintaining authorial reputations. Although it is often difficult to quantify the value to authors of reputation enhancement by virtue of public dissemination of their works, the value is real and meaningful to authors. It is indeed akin to the goodwill that firms build up over time associated with trademarks as the public comes to trust products or services bearing the protected mark.

Fifth, authorial incentives to create new works of authorship are often directly affected by the authors’ perception as to whether they will be given credit for their creations and whether their works will be exhibited in the form they authorized for dissemination. This is true for many authors, but especially for those for whom the expectation of monetary compensation is not an inducement to creativity, including many academic authors and authors of noncommercial user-generated works. These authors often create to express themselves and to share their creations with others. Without some reassurance that their desire for recognition as authors of their works and that their works will be available in non-mutilated form, their incentives to create may well diminish. In many creative communities, attribution and integrity interests are respected through community norms, but incentives to create will be strengthened if the law recognizes and protects those interests as well.

Sixth, by enacting attribution and integrity rights as part of U.S. copyright law, Congress can lead the way to greater public support and appreciation for the many ways that authors contribute to knowledge creation, innovation, cultural advancements, and entertainment in our society. At a time when economic growth and social mobility are driven in large part by creative sectors of our economy, the norm-setting nature of the enactment of legislation recognizing attribution and integrity interests of authors would be in itself beneficial.

Seventh, statutory recognition of authorial attribution and integrity as authorial “rights” would provide authors with some additional bargaining power in negotiating with publishers and other potential distributors of their works. It would be easier for authors to persuade publishers and other distributors to include clauses in publishing contracts that protect attribution and integrity rights if the copyright law in the U.S. were to reflect these two interests as rights that Congress wished to be respected.

Eighth, Congressional enactment of author attribution and integrity rights would bring the U.S. into greater compliance with the country’s obligations under international treaty obligations, particularly Article 6bis of the Berne Convention for the Protection of Literary and Artistic Works. Many member states of the Berne Union and some commentators are skeptical of U.S. compliance with this treaty, notwithstanding enactment of the Visual Artists Rights Act and the patchwork of state and federal laws that the U.S. relied upon when acceding to the Berne Convention in 1989. U.S. leadership in the international community on copyright policy issues will be strengthened by enactment of attribution and integrity rights legislation, and a longstanding bone of contention between the U.S. and other Berne Union nations will at last be buried by U.S. acceptance of this norm.

Although authorial attribution and integrity interests are already protected to some extent in the U.S. through community norms, the use of licenses, collective bargaining agreements, and other means, Authors Alliance supports giving greater recognition to attribution and integrity interests by amending the Copyright Act to expand statutory recognition of these authorial interests.