“The 1950’s distribution mechanism for the casebook…
needs to go the way of the whale oil merchant,
the typing pool and the travel agent.”
— James Boyle and Jennifer Jenkins 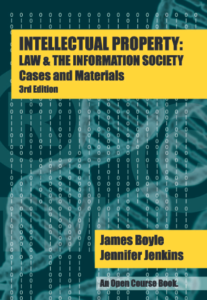 This summer, Authors Alliance founding members James Boyle and Jennifer Jenkins released the latest legal supplement to the third edition of their law school casebook, Intellectual Property: Law & the Information Society – Cases & Materials. As part of our series on innovative publishing models, we are featuring their insightful examination of the pros and cons of their model, and why they ultimately chose to forgo traditional textbook publishing.

Boyle and Jenkins have written extensively about their experience with writing a casebook and distributing it freely online under a Creative Commons license, and in 2015, when the book was first released, they co-authored a law review article of FAQs on open legal educational materials:

“Why do we do this? Partly, we do it because we think the price of legal casebooks and materials is obscene. Law students, who are already facing large debt burdens, are required to buy casebooks that cost $150–$200, and “statutory supplements” that consist mainly of unedited, public domain, Federal statutes for $40 or $50. The total textbook bill for a year can be over $1500. This is not a criticism of casebook authors, but rather of the casebook publishing system. […] Legal education is already expensive; we want to play a small part in diminishing the costs of the materials involved.”

“This is a broken market and one that reflects troubling pedagogical and, to be quite frank, moral choices on the part of both authors and publishers.”

We highly recommend the entire FAQ article for its thoughtful approach to an alternative publishing model, and—thanks to open access—it is available to read in full. We recently caught up with Boyle and Jenkins to ask specifically about their experiences from the authors’ perspective; here’s what they had to tell us:

Authors Alliance: What kind of feedback have you received from your students?

Boyle & Jenkins: They have generally been very positive. Obviously the price is nicer, particularly if it is free, but the benefits of openness come out in other surprising ways.  For example, visually impaired students have told us they really appreciate an open electronic text that can be customized using their favorite programs—to produce a machine-generated audiobook, for example, in whatever format they choose.  Other students like the ability to grab chunks of the textbook and paste directly into their notes.  For law students who often can’t get electronic versions of their—very heavy—casebooks, being able to take the casebook home for Thanksgiving is a plus.

AuAll: Do you have a key piece of advice or encouragement for other authors looking to follow your example? Anything you wish you’d known before you started?

Boyle: Just do it! As far as things we learned—I’d been doing open publishing since I was part of the founding of Creative Commons, so I probably had a head start—but we were surprised and delighted by the way in which openness changes the adoption of a textbook from a 0/1 decision—you do or you don’t—to something in which someone can grab our chapter on the history of copyright, or the economics of intellectual property, and pop it into their class without disrupting anything else.  As we say in the article, it is the shift from the “album” version of textbooks, in which you must by all or none, to the iTunes version where you can take a single track.

AuAll: Are there any other comments/insights that you would like to share with your fellow Authors Alliance members?

B&J: Both of us would say that we believe in Authors Alliance because we think open access to scholarly work is a moral imperative wherever it is reasonably possible.  But in our own lives, it is striking how much tangible benefit in terms of citation, influence, and so on that strategy has yielded.  When it comes to open access to scholarship, doing good can be very compatible with doing well.