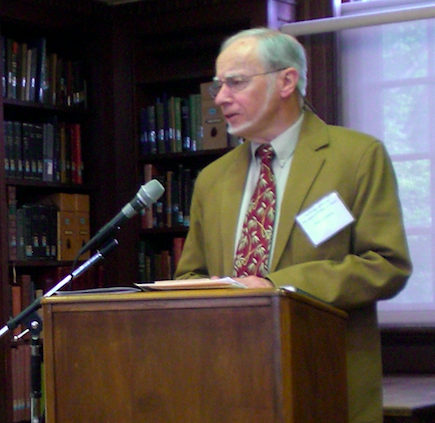 Dale Cannon is Professor Emeritus of philosophy and comparative religion at Western Oregon University. In March of 2017, he reverted rights to his religious studies textbook, Six Ways of Being Religious and made the book available under a Creative Commons CC-BY-NC license in Western Oregon Library’s Digital Commons open access repository. During the past year, the book has been downloaded nearly 600 times. Professor Cannon shared his rights reversion experience for us in the following Q&A.

Authors Alliance: How did you first learn of rights reversion?

Dale Cannon: I first learned of rights reversion at a workshop/conference I attended for textbook authors the year after my book was published (1996).  It was all new to me.  The one thing that particularly stood out was the claim that absolutely none of the polished contract that I had received from Cengage Learning (at the time it was operating under the name Wadsworth Publishing) was “written in stone;” every word of the contract had been open to negotiation. (That, of course, doesn’t mean that Cengage would have readily accepted a rights reversion clause that favored my interests.)  About such matters I was completely naïve when I signed the contract.

I believed at the time that Cengage/Wadsworth was the best publisher I could have secured, as they had a track record of publishing several books closely related to the orientation and content of my book, and their publishing campaigns for those books seemed ideal.  So I’m skeptical that I would have had much leverage to get them to include a rights reversion clause, especially one favoring my interests.

AuAll: What motivated you to request your rights back?

DC: Several factors motivated my request.  One is that the book wasn’t selling well, due to a failure on Cengage’s part to mount a major sales campaign (as had been promised by my editor, who left the company shortly after the contract was signed).  The editor subsequently assigned to my book had no interest in books on religious studies and ignored the previous editor’s enthusiasm and promises.  On top of that, the original price of about $27.00 had long since been left behind and was 3 and 4 times that by the early years of the 21st century.  But I was very interested in having the book become better known and more widely used in university classrooms.  It wasn’t simply a textbook in the comparative study of religions; it was distinctly different and broke new creative ground in the theory of religions.

I have since learned more about self-publishing and how attitudes among academics toward self-publishing have changed a lot and become much more positive.  Of course, I could not consider any such option until I had rights reverted to me.

AuAll: How did you go about requesting a rights reversion?

DC: I simply wrote to the editor (14 years after publication) requesting reversion of rights, explaining how sales had been very low for quite some time (especially for a textbook), with no prospect of that changing.  Clearly my publisher wasn’t making any money on the book, so warehousing remaining copies was becoming a problem, not to mention the prospect of a reprinting.

AuAll: Were you eligible to exercise a clause in your contract granting reversion rights?

DC: There is a clause in the contract entitled “Reversion of Rights,” that seems to be entirely conditional upon the book being “declared out of print in the United States” plus 90 days after such declaration.  I did not appeal to this clause of the contract when I wrote requesting reversion.

AuAll: Did you face any obstacles in getting your rights back?  Is there anything you wish you’d known going into the process?

DC: I did not face any obstacles.  I received communication back from my request within a week, as I recall, and the official reversion of rights within about a month.  The persons with whom I had communication regarding reversion were all cordial and easy to work with.  There is nothing I would have preferred doing differently regarding the process.

DC: There are several different circumstances that need to be taken into account.

Before the contract is signed, by all means try to have a reversion of rights included in the contract.  Do some research and have some alternative models at hand for how it might be worded.  Do take the publisher’s interests into account and, if possible, provide reasons for reversion that not only will be understandable to the publisher but also make it attractive to them.  Be prepared to go to another publisher.  It would be best if you have another acceptance offer in hand, or at least the strong likelihood of one.

After publication, a reversion of rights, in a situation where there is not a strong reversion of rights clause with clear conditions that are met, there should be no problem.  If there is no such clause, then you would need to establish that it would be in the publisher’s best interest to revert the rights to you—which could be a very tall order, unless the future prospect of sales, etc., is very dim, as was the case for me.

AuAll: How has the reversion helped you?  What have you been able to do with your book since reversion?

DC: Reversion has given me freedom to do what I want with Six Ways of Being Religious, including publishing it myself, and possibly finding another publisher. Currently, I have chosen to have it digitized and published on my university’s digital commons.

Since doing so, it has been downloaded more than 500 times in many different countries around the world.  I am considering offering print-on-demand and possibly an ebook version, both for a small price.