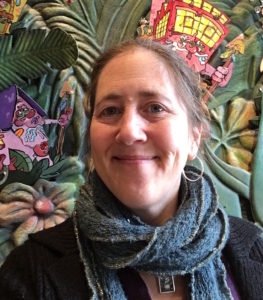 As part of our occasional Q&A series on alternative publishing models, we talked with librarian extraordinaire Jessamyn West, who successfully reverted rights to her book Without A Net, and released it under a CC-BY license on unglue.it, a website that uses crowdfunding to support the release of e-books that are made freely available by a variety of rightsholders.

Jessamyn West: When I wrote Without A Net in 2011, I was a reluctant author. I like to share my writing as widely as possible, but sometimes it’s hard to tell if the best way to do that is through a major publisher or by reducing barriers (i.e., costs) to access. While I adored my editor, I had a frustrating experience with my publisher—a lot of pushback on minor issues, a lot of extra work on my part for a product where I was ultimately not the primary beneficiary—and would not choose to publish this way again.

I wanted to make the book available, but did not really know or understand the process of getting my rights “back” from the publisher. I’d known people who did it in one way or another, but had always assumed, somehow, that it was prohibitively expensive or would involve arguments or lawyers.

I’ve always been a fan of opening up access (my work with the Internet Archive’s Open Library project was primarily geared towards this), and when Eric [Hellman, unglue.it’s founder] approached me to try out Unglue.it, I was excited to help out. It combined my two loves, which are (1) open access, and (2) improving user experience design for community tech tools. I was pleased with how it all worked.

When I worked with the Authors Alliance to help authors share their books on Open Library I got more interested in finding a way to do this with my book. In conversation with Eric Hellman, whom I’ve known through library circles since the early library blogger days, I learned that it wouldn’t be as expensive as I’d previously thought. So I figured, “Hey, what the heck?”

AuAll: Can you walk us through the process of regaining rights from your publisher in order to make the book openly available?

JW: It was so simple! I just sent them an email saying, “Hey, I’d like to do this,” and they said, “OK, it costs $2,000.” We had to do a little bit of back and forth since they had to send me an official contract for all of this, but the bottom line is they are a business, my book was seven years old and not really all that current, and this was just another (good) business deal for them. The hardest part of the whole thing was obtaining an EPUB version. When they made a digital version of the book, it was just a PDF and they sent the book away to an ebook jobber to make the Kindle version. So they didn’t have an EPUB version to give me, and Eric had to do the EPUB creation on his own which was, honestly, probably the most difficult part of the whole thing. EPUB creation is challenging to do right.

AuAll: How did you decide which Creative Commons license to apply?

JW: I opted for the least restrictive I could be without putting it in the public domain, so it’s CC-BY. I wanted my name to stay attached to it, but I didn’t care if people remixed it, sold it, whatever. This took a little bit of thinking on my part, because we’ve all seen publishers who basically repackage public domain materials and sell them to people who are not savvy enough to realize they can get the same content for free . I dislike this, but I didn’t feel like it was my crusade with this particular activity. I also think there is a good argument to be made for CC BY-SA (a share alike) license, just to pay it forward, but again I feel like I was working with digitally divided folks and I wanted the license restrictions to be as easy to understand as possible.

AuAll: Is there anything that surprised you, or that you wish you’d known before you started?

JW: I tend to dive in first and read the fine print later. While it only cost $2,000 to get the rights from my publisher, there were some ancillary costs (sending out “premiums,” cash processing fees, etc, associated with the unglue.it crowdfunding model) that added up that I should have taken into account as part of this process. I had a very supportive community behind me, and could have crowdsourced more of the associated expenses if I had been more deliberate on how I went about it. I was also somewhat surprised how little my publisher cared, which made me feel better about severing my business relationship with them. Not that I had negative feelings about them, but their primary concern is money and not helping ease the digital divide. I’m the opposite, so this approach made sense for me.

AuAll: Have you received any feedback from readers who have benefited from finding your book online?

JW: Most of the people I have heard from are people who were involved in the process, people who helped support it or people who helped me go through this process. I feel in some ways like we’re in an age of aspirational texts. People like having books around “just in case,” or because they’re interested in the topic, and they’re certainly easy to accumulate, but I haven’t heard from anyone who has actually READ the book recently, though I’d certainly like to.

AuAll: Do you have any words of wisdom for other authors who are thinking of “ungluing” or otherwise making their books available under a Creative Commons license?

JW: I am happier not worrying if it’s going to be okay for me to send a PDF of my own book to someone who asks me about something in it. My book came out in 2011 in the same week my father died suddenly, so I was sufficiently distracted that I didn’t really give it the send-off that it deserved. This gave me a second chance to make a modest big deal about the work that I’d done and the ideas that I was hoping to spread, and I was glad I got a chance to do that. Eric was an incredibly engaged and helpful steward of this entire process, so if someone is thinking “I’d like to do this, but how?” I strongly urge them to get in touch with him.

Jessamyn West is a librarian and community technologist who lives in Central Vermont.