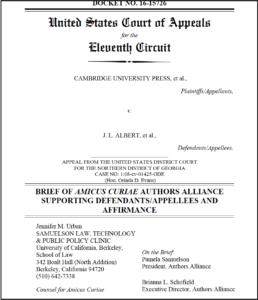 What effect does fair use have on incentives to create? For some academic authors, there is growing evidence that fair use will not diminish, and may even enhance, their incentives to create and distribute scholarly works because it promotes their goals of advancing the progress of knowledge, builds reputational capital, and increases the impact of their works.

Our brief highlighted quotes from several authors of book chapters at issue in the case who reflected on the benefit of fair use to their goals of reaching readers and contributing to academic discourse. For example, Norma Mertz, Professor of Higher Education Administration at University of Tennessee, Knoxville, wrote “I have no objection to the fair use of chapters from my books. Indeed, I find the suit to prevent use of such chapters a serious hindrance to the advancement of knowledge.” Other authors pointed to the benefits of publishing academic works. Douglas Harper, Professor Emeritus of Sociology at Duquesne University, wrote “There is reputational benefit… to doing this work. … The point of this work is to share it!”

A subsequent survey of authors conducted by Brandon Butler and David Hansen reinforced these observations about academic authors’ incentives to create. Butler and Hansen wanted to test the hypothesis that most academics expect their work to be used freely for teaching, partly because academic authors make such uses themselves. They surveyed the authors affected by Georgia State litigation—primarily academic authors whose works had been excerpted by GSU professors in support of their teaching. Their results, although based on a small sample size, suggest that academic authors expect that their works will be used for educational purposes; indeed, many of them make such uses of others’ works as well, and are not highly incentivized to write by copyright restrictions or the promise of royalties.

As Hansen and Butler write in their survey analysis, “Authors faced with a publishing contract that includes a copyright transfer or license should consider whether they trust the publisher to enforce those rights in ways consistent with academic values and expectations.” This and other issues of interest to those considering publication options will be addressed in our forthcoming guide to publication contracts. The guide will be the fourth volume in our series of educational handbooks—stay tuned for a release later this year.